MMI Honors Aynur at Concert that Brings Crowd to its Feet 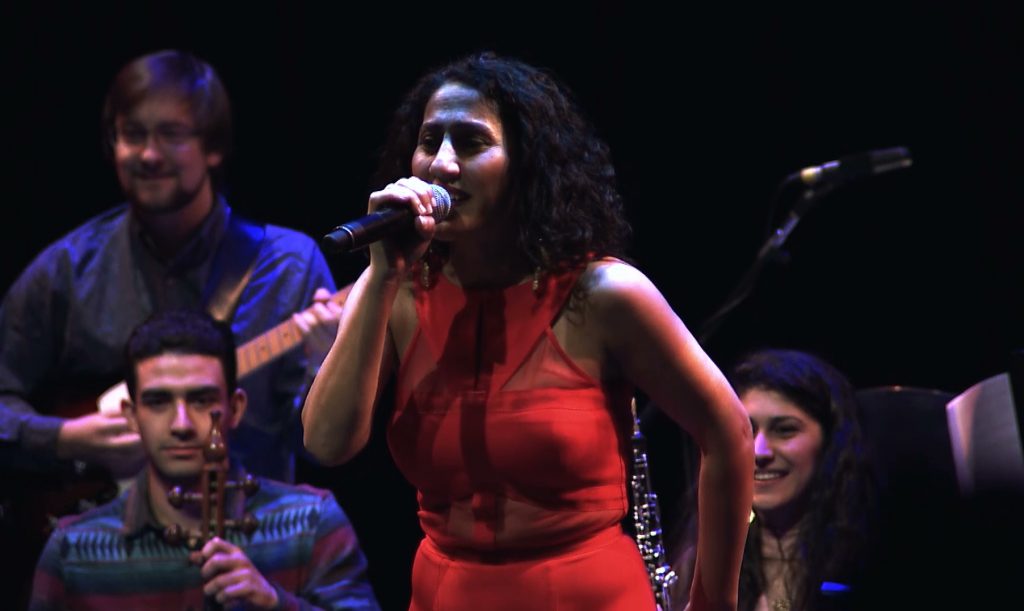 Kurdish vocalist Aynur Doğan, whose stage name is Aynur, received the Mediterranean Music Institute Award on March 16, becoming the first woman to earn the honor since the its inception in 2014. Immediately upon winning the award, she dedicated it to the resilient women of her homeland.

“It’s a big honor for me. I grew up with the voices of women who lamented war and the children they could not raise. Day after day, lamentations have grown but not sons or daughters,” she said. “I dedicate this award to our women who, despite violence and oppression, do not bow their heads.”

Born in Dersim, eastern Turkey, and raised in Istanbul, Aynur sings music that is based on traditional Kurdish folk songs, many of them at least 300 years old. Her lyrics are about the life and suffering of the Kurdish people, especially Kurdish women.

She accepted the award during the MMI’s annual concert at the Berklee Performance Center. As part of the event, the MMI announced that it was launching the Mediterranean Women in Action (MWIA) Initiative, which celebrates and reinforces the power of Mediterranean women in the arts, seeking to raise awareness and promote gender equality in the Mediterranean music scene.

Flamenco guitarist Josemi Carmona, double-bassist Javier Colina, and percussionist José Manuel Ruiz Motos kicked off the event with their song “Bandolero” and other tunes from their new album, De Cerca. Student violinist Tania Mesa appeared on stage with them for the song “Historia de un Amor.”

Aynur opened the second half of the concert, accompanied by MMI artistic director Javier Limón on guitar, with “Ehmedo.” For the next tune, the traditional Kurdish song “Heyder,” she was joined by the MMI Consort, a band of 11 students under the musical direction of Turkish students Elif Çakmut and Mahir Can Küçük, the winner of the MMI Student Achievement Award this year. The third tune, “Rewend,” one of Aynur’s most famous compositions, featured solos by Iranian student Farzin Denghan on kamancheh and guest balaban player Alp Akmaz of Turkey. The fourth song, “Malan Bar Kir—Berivane” (“Displaced from Home”), a Kurdish folk song, inspired the audience to sing along and dance down the aisles of the Berklee Performance Center. The crowd kept singing and dancing through “Keça Kurdan,” the call to Kurdish women, and “Min Digo.” It stayed on its feet for a standing ovation.